In my latest column for Theater Pub, I discuss my internal debate over whether to cut the line "Someone had to throw a bomb" from Orphée after the Boston Marathon explosions took place on the day of the staged reading. Which leads into a larger discussion of artistic and moral courage (with a slight digression about how awesome my boyfriend is).

And though the show is over now, I also wanted to link to the other posts on the Theater Pub blog about Orphée:

Posted by Marissa Skudlarek at 10:04 PM No comments:

Today's post is dedicated to my friend Cody Rishell, because it's his birthday and because I haven't properly thanked him, on this blog, for all of the ways his art and his friendship have enhanced my life over the past three years.

The first real memory I have of Cody is working the Olympians Festival audition sign-in table with him in 2010. He was talking a mile a minute about The House of Mirth (he had just watched the heartbreaking Gillian Anderson film version) and "California Gurls" (the song had just been released and Cody already had it stuck in his head). Not many people can talk with equal authority and enthusiasm about Edith Wharton novels and Katy Perry songs -- so Cody immediately piqued my interest as someone I'd like to know better.

Since then, we have bonded over our mutual love for Alphonse Mucha, La Traviata, The Great Gatsby, indie theater, and much more. Last year, I served as copy-editor and Cody did the layout for the Bay One-Acts play anthology -- we had a ridiculously quick turn-around time to put the book together (one week) but we ended up having a surprising amount of fun doing it. When I discovered that I could use Google Docs to compile a list of typos as I found them, and Cody could see the list update automatically as I typed, he wrote that his "head was exploding with unicorn glitter sex." Yes, it is that much fun to work on copy-editing a book with Cody.

Cody coordinates all of the art for the Olympians Festival each year, meaning that he recruited the artists who did the beautiful posters for my plays Pleiades (Emily C. Martin) and Aphrodite (Kelly Lawrence).

This year, Cody did black-and-white portraits of me, Stuart Bousel, and Meg O'Connor to serve as the promo artwork for our "Behind the Curtain" mini-festival at the end of March. I love the portrait he did of me (based on my headshot photo), especially the eyebrows! 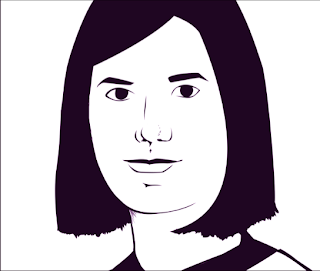 "I was trying to channel '1960s French secret agent go-go car racer girl,'" said Cody when I complimented him on the way he drew my eyebrows.

Because Cody says fabulous things like that. And then the only thing I could do in response was send him this YouTube video of Anna Karina singing "Roller Girl." (I cannot find a version of this online that I can embed in my blog. But click the link, it's worth it.)

Cody also had an art show last year called "Everyone Worth Knowing is a Mythological Creature in Disguise," which is a pretty great philosophy, n'est-ce pas?

I particularly like his drawings of the sexy minotaur girl who goes around carrying a parasol, which she wields like a weapon in defense of the less fortunate. 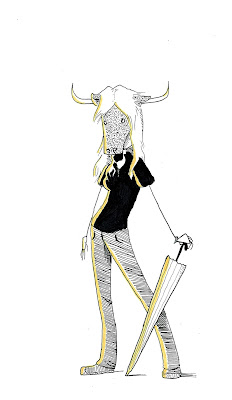 Cody also does all of the artwork for San Francisco Theater Pub, and I have to confess that one of the most exciting things about producing a show at Theater Pub was the prospect of seeing what Cody would draw for the program. His illustration for Orphée this month was even better than I could've hoped: it was double-sided, with Orphée on one side of the paper and Eurydice on the other. So if you hold it up to the light, the image of Eurydice shines through the paper like a ghost. I can't find a picture of this online (and that wouldn't be the right format for it, anyway) but trust me, it was amazing.

So happy birthday, Cody, you mythological creature in disguise, and thank you for all of your beautiful artwork. Here's to many more years and much more beauty.
Posted by Marissa Skudlarek at 4:50 PM No comments:

I think I mentioned a few weeks ago that my play Pleiades was selected by the Atlantic Stage Co. in Myrtle Beach, South Carolina for their New Voices Play Festival. At this very moment, 1:30 PM on the East Coast), the staged reading of Pleiades is beginning in South Carolina...

...and I can't be there, because I am at the Cafe Royale in San Francisco in my capacity as the producer of San Francisco Theater Pub's April show, my new translation of Orphée. (OK, fine, I wrote this blog post in advance and have timed it to go up on Sunday morning.)

Tech rehearsal for Orphée on one coast, a staged reading of Pleiades on the other. Weekends like this don't come along very often.

And it should be no surprise that this beautiful song has been stuck in my head all week: "South Carolina" by Tennis:

Posted by Marissa Skudlarek at 10:30 AM No comments:

I have not one, but two posts on SF Theater Pub's blog this week, because my production of Jean Cocteau's Orphée is happening there on Monday night, April 15!

First, Stuart conducted an email interview with me about translating and producing Orphée. I got to discuss why I decided to translate Orphée in the first place, why it's such a crazy play, my other favorite adaptations of the Orpheus and Eurydice myth, and additional fun topics. I really had a good time doing the interview -- it's so much easier to write when you have someone else asking you questions or giving you prompts!

Then, in my column this week, I noted that Cocteau disowned his first two books of poetry, and used that as the jumping-off point for a discussion of whether it's healthy for artists to disown work that they made when they were younger. I also mention my recent experience directing the staged reading of The Rose of Youth, which I wrote five years ago. (I'll never disown that play, but there are certain passages that now strike me as embarrassingly bad.) The comments to this post, on the blog and on Facebook, mostly involve my friends confessing the embarrassing things they wrote or directed when they were teenagers -- and now I wish I could read these works in all of their awful, naive, teenage glory. Don't disdain your younger self! Embrace her!
Posted by Marissa Skudlarek at 6:01 PM 2 comments:

Here's Part II of my piece about "the Information Age blues" (as my editor tagged it) for SF Theater Pub's blog. It deals with criticism, negativity, feminism, and the struggle to make art when you wonder if you can ever please anybody. Important stuff, in other words!

I'm also happy that this piece has gotten a good response -- lots of people have contacted me about it, whether via the blog's comments, via email, or in person. Maybe I can please some of the people at least some of the time...
Posted by Marissa Skudlarek at 9:51 PM No comments: