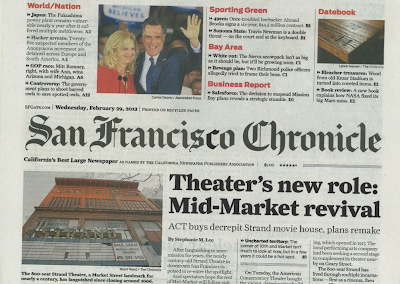 I was astounded to see a theater making above-the-fold, headline news this morning!  Full article here.

Additional links for the day:

Fun story about a French leap-year tradition: a newspaper that only publishes on February 29

My own leap-year post from 4 years ago, recounting a leap year that happened 8 years before that -- still the most memorable one I've had.
Posted by Marissa Skudlarek at 10:46 PM No comments:

Predictability and the Oscars

I write this watching the Oscars red carpet. While I can never resist watching the ceremony, I haven't seen a lot of the nominated movies this year, so I'm less worked up about the Oscars than I sometimes am. I also feel like Oscar-watching must have been more fun when there weren't hundreds of Oscar pundits pontificating online.

I've seen four of the nine Best Picture nominees. The other night, I mentioned this to someone I had just met, and then, without any wrong guesses, he correctly picked the four that I've seen: The Artist, Hugo, Midnight in Paris, and The Tree of Life. I was rather impressed -- he didn't even know of my francophilia!

Perhaps I'm as predictable as the Oscars themselves: of course I would have seen the French Nostalgia Trio and the highbrow art film.  (My roommate also says that when she saw a preview for The Artist, her first reaction was "That seems like a Marissa kind of movie.") I feel I should see Moneyball for Aaron Sorkin's acclaimed screenplay, but it's hard to persuade me to see a baseball movie in the theater. My desire to see The Help for feminist reasons is counterbalanced by my worries about its racial attitudes, "whitewashing the past."  I never got excited about The Descendants, maybe because I was not super impressed by Up in the Air and don't feel like seeing another George Clooney serio-comedy.  And you must realize there's no way I'd go to War Horse or Extremely Loud and Incredibly Close -- they sound turgid and sentimental and didn't even get great reviews.

I'll be happy if The Artist wins as predicted -- it's my favorite of the four I've seen -- though it might be nice if Scorsese or Malick got Best Director to spread the wealth.  Rooting for Hugo to win Art Direction and Tree of Life to win Cinematography.  I wish I'd seen more of the Best Original Screenplay nominees -- I had some issues with Woody Allen's Midnight in Paris script, so I kind of hope it doesn't win, but I don't know what to prefer in its stead.  The Artist? As a playwright, could I get behind a silent movie winning Best Screenplay?

We'll find out soon enough, I guess.
Posted by Marissa Skudlarek at 5:00 PM No comments:

Even though Evelyn Waugh's Vile Bodies begins with an account of a "sick-making" English Channel crossing on rough seas, I read it and wondered whether one can still cross the Channel by boat. Could I perhaps take a ferry between England and France, rather than the Eurostar through the Chunnel?  That seems like the sort of thing I would do.

(Oh yes, did I mention?  I've a trip coming up. Late June. London and Paris. Eleven days. Please feel free to give recommendations of sites/restaurants/shops to visit, for London particularly. Also seeking recommendations of Paris places that have opened in the last five years or are off the beaten track.)

According to train-travel website The Man in Seat 61, it is still possible to make the crossing via ferry but it takes nine hours, instead of two, from city center to city center.  So much for that idea. I will already be spending fewer days in Paris than in London and I can't cut into my Paris time like that.

Meanwhile, having discovered The Man in Seat 61, I'm reading itineraries and accounts of train trips all over the world, and dreaming up future vacations...

Also, isn't it strange that both Evelyn Waugh novels I have read -- Vile Bodies and Brideshead Revisited -- feature an important scene that takes place on a rough sea voyage that leaves most of the passengers seasick?  The opening scene of Vile Bodies, and the scene in Part II of Brideshead Revisited where Charles and Julia take advantage of the fact that they are "good sailors" (and Charles' wife isn't) to begin an affair. I can't recall any other novels that describe seasickness so vividly, though the Guardian lists some examples.  Do you think Waugh was a good sailor or a bad sailor?
Posted by Marissa Skudlarek at 5:52 PM 5 comments: 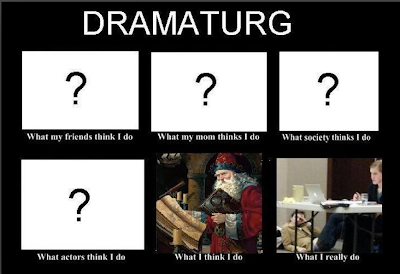 You're probably sick of this meme, I know.

But I'm just beginning my first official gig as a dramaturg -- festival dramaturg for Bay One-Acts 2012! On Tuesday morning, I fielded my first question to the effect of "Dramaturgy? What's THAT?" And on Thursday morning, I saw this. So I laughed.

Plus, someone else told me this week that the word "dramaturg" always makes him think of the word "thaumaturg," which makes the image of the wizard/alchemist dude even more appropriate for the "what I think I do" part of the meme!

Now to decide whether I want to spell my new job title with an "e" on the end or not...
Posted by Marissa Skudlarek at 12:06 PM No comments:

Some quick mid-February links that I cannot wait to share with you:

Posted by Marissa Skudlarek at 11:23 PM No comments:

"The Marriage of Cadmus and Harmony": Advanced-Level Greek Mythology

When you get involved with a theater festival based on Greek mythology, friends who wish to know more about Greek myths will come to you for book recommendations. I got asked about this last month and, to my chagrin, realized it had been years since I had actually read a mythology book. Sure, I had researched certain topics when it became necessary to do so (I came up with the plot of Pleiades after reading the Wikipedia entry), but I hadn't delved deeply into a volume of mythological writing.  I decided to remedy this and picked up a copy of The Marriage of Cadmus and Harmony, by Roberto Calasso.

Calasso is an Italian author and this book came out about 20 years ago to some acclaim, winning a French prize for Best Foreign Book (meilleur livre étranger).  Tim Parks' English translation also won an award.  The Marriage of Cadmus and Harmony is Calasso's idiosyncratic take on the corpus of Greek mythology, weaving stories together, drawing parallels, identifying motifs, discerning deeper structures, and investigating what the myths imply about Greek and Western civilization. He incorporates anecdotes from Ancient Greek history as well as from myth. The book is in twelve chapters, which might lead you to assume that each chapter focuses on one of the twelve Olympians, but Calasso's structure is far more twisty than that. Stories lead into stories in a style that one associates far more with The Arabian Nights than with the Greeks -- even though any student of Greek myths knows that, because they are the stories of an extended family, it is easy to link them together.

If I had to pick one word to describe The Marriage of Cadmus and Harmony, it would be "European."  It's not that the translation is clumsy.  If you examined the individual sentences, you would not know that they had been written in a foreign language. Rather, what seems foreign to an English-speaking reader is the book's content -- its structure, its thoughts, its outlook on the world.  I feel that continental Europeans have a much higher tolerance for abstract thought than Anglo-Americans do, and The Marriage of Cadmus and Harmony is full of abstract thoughts.

Thus, Calasso will begin with an intensely readable retelling of a myth (here, Paris' abduction of Helen):


Of all times to go away, the prince chuckled to himself, Menelaus had chosen these very days. He was gong off to Crete, for his grandfather Catreus's funeral. As he left, Menelaus, serious as ever, told Helen to look after their guest. After that, there were absolutely no other men about. Helen and the prince were each sleeping alone in the same palace. In the emptiness of the palace halls, Aphrodite assembled those archons of desire Himeros and Pothos, and the Charites too. But on the visible plane, the person who acted as pimp was Aethra. Paris gripped Helen's wrist. The Trojan's escorts loaded up her riches and the things the prince had pretended were gifts. Paris stood tall on a chariot drawn by four horses. Helen was next to him, tunic tossed back over her shoulders, offering her body half naked to the night, where nothing could be seen but Eros's dazzling torch twisting and turning in front of them. Behind the fleeing couple, another Eros was waving a torch. The two lovers and their escorts raced across the open space of red earth and scattered olive trees that led down from Sparta to the coast.

And then he will move into a much more abstract, philosophical mode, to discuss the deeper meaning of the mythological figure:


To defend herself, Helen relies on the brilliant surface, makes it throb as no other figure, however fleshy, could, since other figures have no doubles, and indeed as no idea ever could, since ideas have no pores: this is the supreme level of existence, mocking every other. The object of the dispute between Homer and Plato is the body of Helen. Both men won. When we see the goddess reproduced thousands upon thousands of times, the Platonic curse of the copy triumphs. But the goddess is a star and occupies a unique, unassailable place in the sky.

At this point I should confess that I have a low tolerance for abstract thought and a great affection for striking, specific details. I am hard pressed to care about the "Platonic curse of the copy," but I love the "tunic tossed back over her shoulders" and the "gripped wrist" and the "red earth and olive trees." (Though, note that Calasso presupposes a great deal of mythological knowledge on the part of his readers. The story of Paris and Helen may be famous, but very few people know about Himeros and Pothos, or that the "Charites" are better known as "The Three Graces.") The Marriage of Cadmus and Harmony certainly made several myths come alive in my mind as never before; but at other times it would lose me, and deaden the myths again, with excessive philosophizing.

To make matters worse, this erratically organized book has no index or chapter headings.  I doubt I shall ever read this book cover-to-cover again, but it contains several interesting passages that I might like to go back and reference. But how could I, without an index? I rarely write in my books, but I finally got so frustrated that I grabbed a pen and, on the title page of each chapter, wrote down a list/outline of the topics covered therein.  Here is the start of my list for Chapter VIII, which may give you some idea of the way Calasso skips from topic to topic and mixes mythology, philosophy, and history.
I would therefore recommend The Marriage of Cadmus and Harmony to advanced-level students of Greek mythology only! You will not appreciate its insights unless you are already familiar with the myths and have started to see some common themes or parallels that link them.  And because its structure is unlikely to make sense to anyone not named Roberto Calasso, it is less useful as a mythographical resource than it would be otherwise.
Posted by Marissa Skudlarek at 9:38 PM 3 comments: