"The N I Love" (With Apologies to the Gershwins)

This is what happens when you let me out of work two hours early on New Year's Eve, and I get bored on the subway platform, and think about how much time I've spent waiting for the N-Judah in the four years I have lived in my apartment:

And it's even slower Sunday
Then on Monday
It breaks down
Yeah, they're sure to fix it one day
But on Wednesday?
That's an "it depends" day

But still, it takes me home
And downtown too
From east to west I roam
It pulls me through
And so all else above
I'm waiting for the N I love.

Posted by Marissa Skudlarek at 3:26 PM No comments:

I hope you are having a great holiday season!

Here is a gift for you from the San Francisco theater community: the video of the 3rd Annual San Francisco One-Minute Play Festival. 72 plays, 40 writers, 40 actors, innumerable acts of creativity.

This year, the video has title cards to identify each play and playwright. But if you just want to know what my plays are, they're "Welcome Home," at 19:40 on the video, and "Those Americans" at 1:21:45. "Welcome Home" was in the group of plays directed by Jill McLean; "Those Americans," by Desdemona Chiang.

Discussing Chiang's clump of plays, festival artistic director Dominic D'Andrea said "They are all like little kicks in the pants: each one hurts a little bit." Which is one of my favorite things anyone has ever said about my work.

Some other personal faves this year:

Thanks to Playwrights Foundation for sponsoring the festival, and to Dominic D'Andrea for organizing the logistics and generously supporting all of the artists.
Posted by Marissa Skudlarek at 8:40 PM No comments:

Just popping in to post links to some of my SF Theater Pub columns that have been sparking lively discussions.

This week, I used my column to come out as a feminist (well, in case you didn't know), inspired by the larger conversation about feminism in theater that seems to be going on everywhere this month.

Having neglected to do so at the time, I also wanted to link to my November 1 column, "Community Theater vs. Indie Theater," which has proven one of my most popular columns with readers & commenters.

In his intro to the earlier column, Stuart Bousel wrote that I was "tackling that mixture of love-hate, pride-frustration, glory-despair that characterizes a life in the Indie Theater world."

And I think that life as a feminist in the 21st century is also characterized by a mixture of love/hate, pride/frustration, and glory/despair. My column is, perhaps, an attempt to make sense of that tangle of emotions.
Posted by Marissa Skudlarek at 7:48 PM No comments:

A Month to Wear a Crown 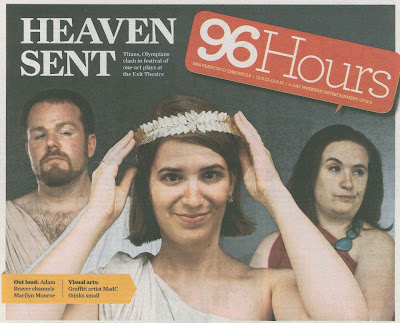 That is, I appeared on the cover of the San Francisco Chronicle's December 6 arts section wearing a bedsheet toga, a crown, and a goofy expression. Flanked by my friends and fellow playwrights Stuart Bousel and Claire Rice (both working different variants on a "Who does that bitch with the crown think she is?" attitude).


Inside, the Chron published a lovely article about the Olympians Festival, as well as another photo. The most delightful surprise was that I got name-checked in the article as an "established playwright." The first time that the Chron prints my name, and they already consider me an established playwright! This, in an era when any playwright whose work hasn't appeared on Broadway is typically referred to as an "emerging playwright"! Many playwrights chafe against the "emerging" label, finding it condescending. So there is something deeply satisfying about seeing a major national newspaper refer to me, in print, as "established." 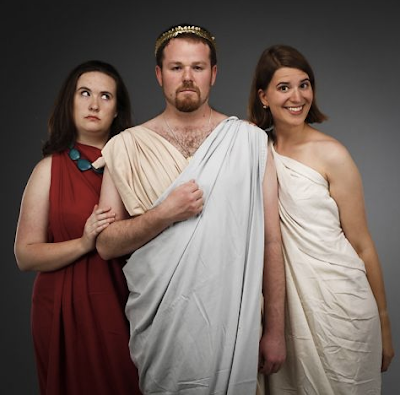 I had worried that appearing on the cover of a newspaper arts section while crowning myself (like Napoleon) is an act of overweening hubris, and surely the gods would see fit to punish me for my pride and vanity. But instead, December has been kind of a charmed month for me. The reading of my Aphrodite screenplay was a success, and won the audience vote at the end of the night. I'm as busy as I've ever been, seeing great new work at the Olympians Festival, meeting interesting new people, running into people I used to know, winning raffles, experiencing all kinds of fortuitously karmic moments.

And with that, I'm off to see the final performance of this year's San Francisco One-Minute Play Festival, which includes two plays of mine. That's another delightful surprise. I must've gotten left off an email thread somewhere, because I had been led to believe that only one of the two plays I'd submitted had been chosen for production. It was only this afternoon that I found out that both of my plays are in the festival!

I know I'm a lucky girl, and I'm trying to be grateful for all of the overwhelming-in-a-good-way things that are happening to me.

Photos by Russell Yip for the S.F. Chronicle.
Posted by Marissa Skudlarek at 5:58 PM No comments:

69 Reasons to See "Aphrodite, or The Love Goddess"

The staged reading of my screenplay Aphrodite, or the Love Goddess is taking place on Friday, December 7, and I would love to see you all there! (if you can make it to the Exit Theater in downtown San Francisco at 8 PM.) Still need convincing? Here are 69 reasons to show up. 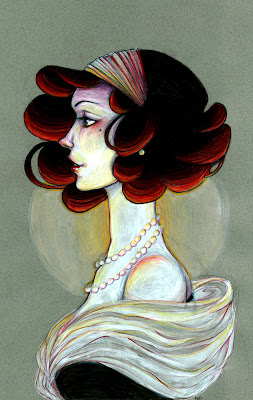 Once again, this one-night-only event is taking place on Friday, December 7, at 8 PM at the Exit Theatre, at 156 Eddy St, San Francisco. I hope to see you there.

Credits: Aphrodite poster art by Kelly Lawrence.  I also need to credit the inspirations for this post, which are twofold:

Posted by Marissa Skudlarek at 8:42 AM No comments: 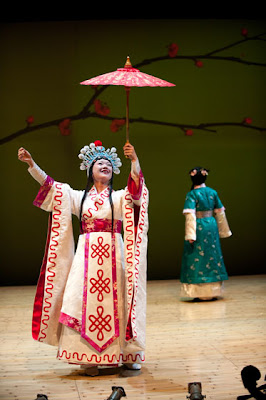 Mary Zimmerman has to have one of the most passionately devoted fanbases in the American theater. At least, in the circles I move in, we've been anticipating her newest play The White Snake for over a year, ever since the Oregon Shakespeare Festival announced it for their 2012 season. There were hastily planned road trips to Ashland to see The White Snake ASAP; there was much rejoicing when Berkeley Rep announced The White Snake as their 2012 holiday show; there was me deciding to become a Berkeley Rep subscriber for fear that the show would sell out otherwise; there were my non-"theater geek" friends getting just as excited about the show as I was. Finally, after all these months of anticipating, I saw the show at the end of Thanksgiving weekend. It was worth the wait!

The White Snake is a 100-minute adaptation of a Chinese folktale about a learned snake who takes human form, marries a mortal, becomes a loyal wife and respected citizen, but arouses the suspicions of a fanatical Buddhist monk. This story is very popular in China and, although it is not so well-known in the West, it echoes other folktales about animal-women who marry mortal men, like John Keats' "Lamia" or the Japanese folktale of the Crane Wife.

Zimmerman's adaptation features a multi-ethnic cast (most of whom did the show in Ashland), Chinese-inspired music, beautifully crafted costumes and props, and her trademark innovation in staging and imagery. For instance, at the beginning of the show, the snake characters are represented by some completely adorable puppets -- snake-phobics have nothing to fear from this show -- as well as by having the ensemble, carrying painted umbrellas, form one big "snake." 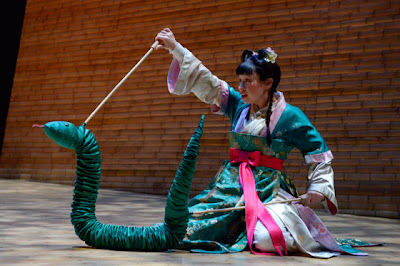 In its final moments, the play does that thing that every Zimmerman show seems to do: it reaches for transcendence, for a moment of painful beauty, and achieves it. As all good folklore-based theater must, it also resonates in ways that go beyond mere narrative. The protagonist's struggle whether to tell her husband that she is really a snake in disguise echoes the fear that we all have when starting a new relationship: will my partner accept me once he knows who I really am, deep down? Or will I frighten him away?

The White Snake is a kickass heroine: a scholar, magician and herbalist who goes on a quest to save her husband's life and engages in an epic battle with the monk -- and does it all while pregnant. She also has a sidekick, her stubborn, outspoken, and fiercely devoted friend the Green Snake, who takes human form as servant "Greenie." Indeed, The White Snake might be an excellent show for getting girls interested in theater. They'll initially be attracted to the romance and magic of the folktale, and along the way they'll hear a story of strong female characters told by a beloved female writer-director. Take your daughters/nieces/pre-teen friends! (When I saw the show on Sunday the 25th, the audience was mostly full of Berkeley retirees. I wish there'd been more young people and children there!)

Unlike the other Zimmerman works that I'm familiar with, The Arabian Nights (which I saw in Berkeley in 2009) and Metamorphoses (which I've read), The White Snake tells just one story, rather than a collection of them. Yes, it's a story with several twists and turns -- like a snake! -- but there were a few moments where the pace seemed to slacken or my interest flagged, which is something that I never felt in The Arabian Nights. For this reason, and also because my first encounter with the theatrical magic of Mary Zimmerman will forever have a place in my heart, I probably would rank The Arabian Nights slightly higher than the new show. Nonetheless, The White Snake is a beautiful piece of theater that will surely expand the Zimmerman fanbase even more.