It's Been a Good Month

Yes, I've cut down on my blogging, but it's not due to being swamped with work, nor because I'm feeling depressed and uninspired. No, May was an excellent month for me, apart from the fact that I came down with a nasty cold that laid me low for about two weeks. I managed to accomplish a lot, and I should be able to announce some very good news within the next few days... watch this space!

Highlights of the month include:
For these and other reasons, May 2010 was a very, very good month. Onward to June!
Posted by Marissa Skudlarek at 9:36 PM 5 comments:

"Giant Bones": A Magical Night at the Theater 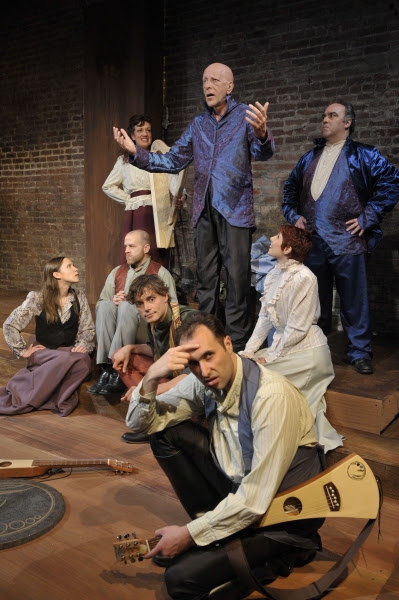 On Friday night I went to see Giant Bones, the world premiere play based on a book of short stories by Peter S. Beagle, as adapted and directed by Stuart Bousel. (Disclosure: Stuart is a mover and shaker in the SF theater community and an acquaintance of mine, so I'm writing about this show because I want to support my friends, not because I fancy myself an objective theater critic.) Rumor has it that Beagle was convinced that no one could successfully adapt his stories into a coherent work of theater, then read Stuart's script and was absolutely floored! He lives in Oakland now, and lent his support and guidance to the production.

Stuart's brilliant idea was to use the old device of a play-within-a-play to tell multiple stories in one evening. When we watch Giant Bones, we are ostensibly watching a performance by the "Jiril's Players," a traveling theater troupe in some medieval-ish fantasy kingdom. In Act I, the Players perform three different fairy-tale-like stories, and we also get to eavesdrop on some of their backstage goings-on. In Act II, the Players enact their own story, telling how they lost their royal patronage and were forced out on the road.

My parents were in town this weekend, so they were my theatergoing companions at Giant Bones, and they both really enjoyed it--even my mom, who normally hates anything fantasy or sci-fi. But, as I said, the stories in Act I are mostly in the vein of fairy tales, the kinds of stories that we all enjoyed as children: wizards, wicked tyrants, talking fish, tribes of giants. And the story in Act II, being a tale of political intrigue and courtiers' maneuverings, doesn't involve any magical elements at all. Instead, it becomes a moving parable about the power of theater and how it can be used and abused. I know, there are a lot of plays about plays out there, and sometimes it can seem like an overdone topic. But not when it is really well done--written, staged and performed by people who truly do know and love the power of theater--the way that Giant Bones is.

The Jiril is played by the commanding Jay Smith, and his Players are a troupe of nine talented actors who easily take on multiple parts. I especially liked Jessica Rudholm's expressive use of gesture in her role as a wicked queen, and Rik Lopes' self-assurance in the role of Dardis, the manager and star actor of the theater troupe. Kai Morrison amuses as he plays an assortment of villains, and also composed the song that opens Act II.

Giant Bones continues at the Exit Theater through June 19. As an added perk, everyone who attends the performance will receive (in a few months) a special limited-edition copy of Beagle's book Giant Bones. Amazing! I've never attended any other theater production that offered such a special tie-in souvenir--and believe me, this play has made me curious to read the rest of Beagle's stories!

Here is a promo video where Stuart and some of the cast discuss their work on this production. Congrats to them!

The Secret of Theatrical Success

"The secret of theatrical success is this: you must set a decoy at the door so that part of your audience can amuse themselves there while the rest are inside. Shakespeare, Molière, and the profound Chaplin know this well."

Huzzah, the busy season at my job is now over, so I'm looking forward to having my life back... but I will not necessarily return to blogging at my old compulsive pace. I have a lot of plans these days--plays I want to write! and translate! and adapt! and help my friends produce!--so I think I might be better served by concentrating on these projects, and not feel like I need to constantly generate ideas for new blog posts. Of course, I hope very much that these other projects of mine will come to fruition, and if they pan out, I'll certainly let you know what's going on with them! But until they become something more than just a glimmer in my eye, I feel it's better to be a little cagey about what I'm plotting...

Also, my old rule for writing about theater on my blog was that I had to be careful when writing about contemporary/living playwrights, but dead/classic writers were fair game. (And yes, I know that several times I violated my rule about not criticizing contemporary writers... but I always thought hard before I did it.) However, now that I am on a committee that curates a reading series of "hidden classic" plays, I've got to be circumspect when writing about older plays and playwrights, too! Now, when I read a play that I think has been unfairly overlooked, and I want to call attention to it, I shouldn't do it by writing a blog post... first I should bring it to the attention of my fellow committee members and try to persuade them to include it in our reading series! And I don't want you to be able to guess what Hidden Classics we will produce merely by an astute perusal of my blog. In a couple of months, we should be ready to announce the 2010-2011 lineup of Hidden Classics, but for now, mum's the word...
Posted by Marissa Skudlarek at 6:28 PM 5 comments:

I've got wheels and you wanna go for a ride

Lately, I've been thinking about power-pop music. Not something I ever had much cause to do before. But then I saw Girlfriend at Berkeley Rep (prev. post), the new musical written around Matthew Sweet's 1991 power-pop album of the same name. And also, I'm slowly working my way through McSweeney's San Francisco Panorama, and just read Michael Chabon's essay about power pop and the 1970s band Big Star.

Chabon writes: "[Power pop] is happy music--eminently "poppy"--which depends for its power on the cryptic presence, in a lyric or a chord change or a bit of upside-down vocal harmony, of sadness, yearning, even despair. [...] True power pop is rueful and celebratory at the same time, glorifying desire and frustration, which is why so many power-pop songs concern themselves with the subject of Tonight, or Tomorrow Night, or Saturday Night, or some other night that will only be perfect for as long as it can be deferred. [...] All the clouds of power pop are worn inside out to show the silver lining."

When I read that, it made me think of my new favorite song, "The Luckiest Guy on the Lower East Side" by the Magnetic Fields. (69 Love Songs was one of the things that helped me cope with the busy season at my job.) If you don't know it, here's a fan-created music video:

I guess, strictly speaking, this is not "power pop"--there's no guitars or drums or vocal harmonies in the mix. But it fits Chabon's dictum of "eminently happy/poppy music that is haunted by despair." With its bouncy synthesizers, its wacky spring-like thing twanging away in the background, its sunny title, "Luckiest Guy on the Lower East Side" sounds like it ought to be a happy love song. But listen to the lyrics--and the purity of yearning contained in that last "wanna go for a riiide"--and it becomes one of the most poignant songs I have ever heard. It makes my heart hurt.
Posted by Marissa Skudlarek at 9:21 PM 5 comments:

Over the weekend I went to see the new musical Girlfriend at Berkeley Rep. (Full disclosure: one of my friends from college was operating one of the spotlights--I made sure to applaud extra hard after the songs that featured her expert tracking of the actors with the spotlight!)

Like American Idiot earlier in the season, Girlfriend is a "jukebox" musical--it is based on the pop-rock music of Matthew Sweet, particularly his album Girlfriend, from 1991. I had never heard of Sweet before I saw this show (the early '90s are kind of a cultural blind spot for me), but it's good music--timeless, poppy, earnest and melodic.

In Berkeley Rep's Girlfriend, the music is played by a 4-person all-female band (styled and costumed to look like butch lesbians) and sung by two young actors, Ryder Bach and Jason Hite, as they enact the story of two gay Midwestern teenagers struggling to express their attraction to each other. Neither the characters nor the plot is going to win many points for originality; it's the old story of young love having to overcome societal obstacles. And it's a wish-fulfillment fantasy too: one of the boys is a geeky, epicene outcast and the other is a smart, guitar-playing, All-American jock. And perhaps the show (which runs about 2:05, with intermission) takes a little too long to tell its sweet but slender story.

At the same time, though, the audience really does fall in love with these characters--and, as a writer, that is not an easy effect to acheive. It is much easier to shock or offend an audience, than it is to make people care for your characters as though they are real human beings--and say "awww" aloud as the story wraps up. While the Girlfriend boys are archetypes, there is an attempt to give them backstories and witty dialogue that fleshes out their characters--they are several degrees more rounded than the young men of American Idiot. The Green Day musical certainly got my heart pumping to a punk-rock rhythm, but it didn't stir my emotions; Girlfriend left me with a sweet little smile.

Though Berkeley Rep is doing its best to encourage the link, American Idiot might actually be the wrong musical to compare Girlfriend to. The more I think about it, the more Girlfriend reminds me of a contemporary version of Kneehigh's/ACT's Brief Encounter (my review): a story of a love that society wants to repress, a wish-fulfillment fantasy where a mousy protagonist finds himself/herself desired by a smart, handsome, successful guy. And all accompanied by the most upbeat pop music of the era. In both cases, too, the show is not only about the love between its two lead characters. It's about our love for these kinds of stories and songs, and the enduring hold they have on our imaginations; about the fact that we all can remember what song we were listening to in high school when that special someone glanced our way...
Posted by Marissa Skudlarek at 9:17 PM 4 comments: