"A Writer Never Has a Vacation"

Ionesco said, "A writer never has a vacation. For a writer life consists of either writing or thinking about writing."

Taking 15 days: San Francisco to New Jersey to London to Paris and back to S.F.

This has been a crazy month for me -- planning my trip, cramming in lots of theatergoing before my departure, the Olympians book was released, there's some stressful personal/family stuff going on -- which may somewhat explain my lack of blogging.

(You should check out my latest Theater Pub post, "Why Songs of Hestia Should Be On Your Summer-Reading List," though, if you haven't already.)

I don't know what my internet access will be like for most of this trip and I think my focus during my travels might be on personal journaling rather than public blogging... but I do hope at some point to write about some aspects of my trip. (I've already got tickets to see 2 plays in London!)

OK, so maybe I won't be proving Ionesco wrong after all. Writing is always a big part of my travels and while I may not be doing any playwriting while I am away, I still won't be able to turn off the journaling/blogging/putting-words-together part of my brain.

I'm exhilarated at the thought of returning to Europe after five years, but also exhausted from the busy month I've been having. Hopefully I can get a good night's sleep on the red-eye to London Sunday night and arrive there alert and wide-eyed and ready to take it all in!

We at San Francisco Olympians Festival are currently running an IndieGogo campaign to raise funds for the festival's third edition, coming this December. (Featuring my new play The Love Goddess as one of 24 original one-act plays inspired by Greek mythology.)  There are four days to go until the campaign concludes and I'm pleased to say that we're just $200 away from our goal!  But don't let that stop you, if you're moved to contribute: any additional money we earn will go to paying the festival's writers, directors, actors, and poster artists. I think I can speak for everyone working on the festival to say that we will be so grateful for any contribution. Once again, our IndieGogo campaign ends on Thursday, so please don't delay!

A $48 contribution, by the way, gets you a copy of Songs of Hestia, the new book of five plays from the 2010 Olympians Festival, and my debut as a published author. (I wrote the introduction.) The book is also available on Amazon.com if you'd prefer to get it that way -- or if you need to buy additional copies for your friends!
Posted by Marissa Skudlarek at 9:53 PM No comments:

"Tenderloin" at Cutting Ball: Voices of a Neighborhood 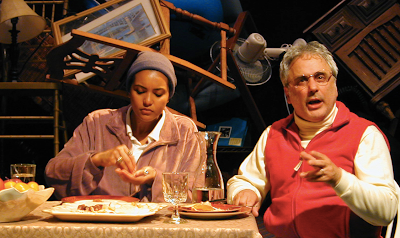 The week that Tenderloin opened at Cutting Ball Theater, I published a column for San Francisco Theater Pub that could be seen as disparaging the Tenderloin neighborhood. (It was mostly about how having so many S.F. theaters in the Tenderloin puts our artform at a disadvantage, since it's hard to entice people to visit the neighborhood and it doesn't get good foot traffic.) The timing of my article vis-a-vis the opening of Tenderloin was purely coincidental and I hope that no one made the mistake of interpreting my piece as a veiled swipe at Cutting Ball. Nonetheless, you could say that I seemed to set myself up in opposition to their play. My article took the conventional bourgeois attitude toward the Tenderloin; Cutting Ball's play is designed to counteract this.

Tenderloin has been over a year in the making. Led by director and documentary-theater specialist Annie Elias, the six actors in the piece interviewed Tenderloin residents and other people with a connection to the neighborhood, then shaped the interviews into a theater piece. In the tradition of other documentary-theater artists such as Anna Deavere Smith, they worked to reproduce the exact phrasing, cadences, vocal tone and overall affect of the interviewees.

The result is absolutely stunning from a performance standpoint. MVPs include Tristan Cunningham, who portrays a sad-eyed homeless beatboxer, an irrepressibly cheerful Filipina motivational speaker, and a cynical street-cleaner; and Rebecca Frank, an actress in her mid-twenties who somehow manages to transform herself into 86-year-old Leroy Looper, the "Mayor of the Tenderloin." Meanwhile, David Sinaiko, a middle-aged man with gray hair, plays Leroy's doting wife Kathy. Michael Uy Kelly plays a transsexual waitress, a retired police officer, and a Tenderloin resident with a hilarious story about being asked to take care of a baby. Siobhan Marie Doherty excels at playing tenderhearted female characters (a young woman in an abusive relationship; a massage therapist who provides services to Tenderloin residents) while Leigh Shaw plays more authoritative or powerful women (an activist lawyer; a pastor at Glide Church).

I also found the piece interesting from a playwriting perspective. After all, none of it was conventionally written, but it was wrought out of dozens of interviews -- the speakers are often juxtaposed in interesting ways so that they seem to be in dialogue with one another. I found the structure of the piece effective overall. Moreover, these people speak in fascinating, idiosyncratic ways, which I see as encouragement to be bolder in my own writing. There are times when I'll write a line and then strike it out, saying, "No one would ever say that in real life -- it's too weird/too flowery/too nakedly emotional/etc."  But, it turns out that when you interview real-life people, they do say weird, flowery, emotional, expressive things. And of course, this heightened language works great on stage.

As for the political and thematic messages of Tenderloin? Clearly, the piece is designed to display often-overlooked aspects of the neighborhood -- the architectural heritage, the children who are growing up there (little kids on bouncy-balls and a bubbly high-school student both appear in the play), the many acts of kindness and compassion that take place on a daily basis. The piece also comes out against city policies that have turned the Tenderloin into a "containment zone" for the poor and downtrodden and the social services that cater to them. It used to be that halfway houses and soup kitchens were scattered around the city, but starting in the '70s, they became concentrated in the Tenderloin, amplifying the neighborhood's problems. I found this point especially striking and persuasive because it parallels what I said in my Theater Pub column. I believe San Francisco would benefit if its theaters were located in neighborhoods across the city, rather than just in the Tenderloin; and I can now see how the city would benefit if there were soup kitchens or drug-rehab clinics outside of the Tenderloin, too. Moreover, if the Tenderloin has become synonymous with "everything people don't want," and the majority of San Francisco theaters are located in the Tenderloin -- does this also mean that theater is something that "people don't want," that they'd rather not have in their neighborhood? Something to think about.

Yet at the same time, I felt like Tenderloin sometimes went a bit too far in trying to make us love the neighborhood. We hear from a young woman from Palo Alto who feels safe and welcome in the Tenderloin... but we don't hear from any women complaining about getting catcalled or stared at, which has frequently been my experience. (OK, the catcalling is usually mild, along the lines of "Hey beautiful, give me a smile" rather than anything disgustingly sexual. Nor have I ever had the sense I would be physically assaulted. Nonetheless, it's not exactly fun to walk past a dozen guys loitering on the sidewalk and staring at you.) I wish that that perspective had been represented somewhere in the patchwork of stories that make up Tenderloin.

At the beginning and end of the show, the actors portray what we might think of as "typical" Tenderloin denizens -- drunks, prostitutes, the homeless and mentally ill. In the final scene of the performance that I attended, actress Rebecca Frank (whom I know somewhat) was playing one of these characters. She spotted me in the audience, caught my eye, made some comment about how tall I am, came up the aisle, and asked me to give her a hug. I complied, but at the same time, I was all too well aware that I was hugging Rebecca, a nice young woman pretending to be a homeless drunk, rather than an actual homeless drunk. Which, I think, says something about the limitations of theater. Tenderloin certainly taught me a lot, introducing me to some fascinating real-life people as channeled through the skillful performances of six talented actors. Perhaps I empathize a bit more with the Tenderloin now. But I'm not going to embrace any homeless drunkards any time soon.

Tenderloin has been playing to sellout crowds and was just extended for 2 more weeks, June 14-24. Tickets here.

Image: Rebecca Frank and David Sinaiko as Leroy and Kathy Looper. Photo by Rob Melrose.
Posted by Marissa Skudlarek at 8:03 AM No comments: