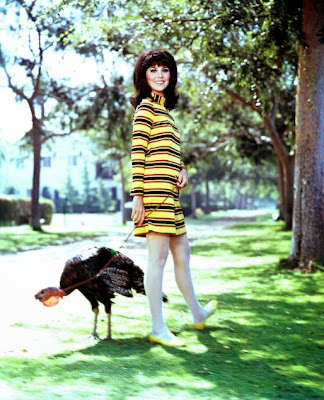 Mead Hunter posted this whimsical image on my Facebook wall yesterday. Ever since I wore a mini-dress and colorful tights to visit him one day in the mid-2000s, he's been convinced that I am the 21st-century embodiment of Marlo Thomas in That Girl! Hence, this photo of Thomas with a turkey.

"Quirky" is an overused word, but I am thankful to have friends who are both so thoughtful and so quirky.

Brussels sprouts with bacon are currently roasting in my oven, and then I'll be off to an "orphan's Thanksgiving" with some other delightfully offbeat folks. 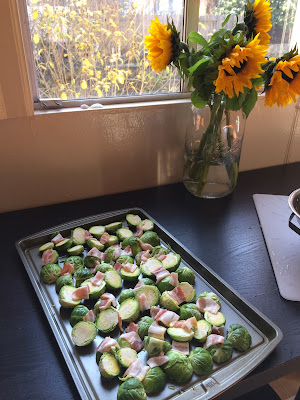 (Finally having a smartphone means that I am now more likely to document my life in Pinterest-y images such as the above. Credit my roommate for buying the sunflowers, though.)

We Will Never Be Royals @ SF Theater Pub Blog

I'm taking the week off from my San Francisco Theater Pub column, due to the Thanksgiving holiday, but in the meantime, here's a column from a few weeks back that I never posted to marissabidilla.

The column is titled "Theater-Goers of the World, Unite!" for a taste of Marxist rabble-rousing, but then the next day I heard Lorde's ubiquitous song on the radio and thought maybe I should've titled my piece "We Will Never Be Royals" instead?

After all, the point I was trying to make feels similar to what Lorde is singing about -- how the media (pop music, big regional theaters) present an image of elitist wealth that is out of reach of "average" people, especially in an era of rising income inequality. But shouldn't we be making art for the average person in the first place?

(It was about a year ago that I first heard and became obsessed with Pulp's song "Common People." Evidently I like my pop music with a good helping of socioeconomic commentary.)

Whatever you want to call it, my column got a good response and high marks from my editor, so go check it out.
Posted by Marissa Skudlarek at 10:59 PM No comments:

Here's a blog post I've been meaning to write for nearly a year: How the Bechdel Test Made Me a Better Playwright.

The post tells how I wrote the closing scene of my screenplay Aphrodite, or the Love Goddess to make it comply with the Bechdel Test. The scene worked like gangbusters, and I probably could not have arrived at it if I hadn't been thinking of the Bechdel Test. I'd love it if other playwrights considered using the Bechdel Test in this fashion, as a way of sparking their imaginations and leading them down pathways that they hadn't previously considered.

(An anecdote that didn't make it into the column: At the time I had the first living-room reading of Aphrodite, I hadn't written the final scene, but I was mapping it out in my head. I told my cast, "I want it to show Rosalie with another woman, because that hasn't happened yet," and everyone in the room went "ooooh," really salacious-like, because it sounded like I was saying that the scene would depict Rosalie with another woman sexually. I blushed like crazy and said "No! Not like that!"

Well, I suppose one does have to wonder: if Aphrodite is the goddess of love and many of the gods are bisexual, why are there no myths that show Aphrodite with female lovers? [Answer: the Greeks were a patriarchal culture in which it was OK for men to be homosexual, but not for women to be lesbian. Another answer: there is something very homoerotic about paintings that show Aphrodite and the Three Graces all clad in mere shreds of gauze, isn't there?] Nonetheless, that's not the direction I wanted to go in with my screenplay. Maybe it would've been more courageous -- and still Bechdel-test compliant -- if I had.)

Anyway, like I said, I've wanted to write this post for a year and I ended up doing it for my Theater Pub blogging gig, so go check it out.
Posted by Marissa Skudlarek at 11:32 PM No comments: