Possible preview of my day tomorrow

I'm taking a vacation day tomorrow, with starry-eyed visions of working on my play and not having to fight for a seat at the coffee shop. But this funny video, from local sketch comedy troupe Killing My Lobster, tells me I oughtn't get my hopes up.

Seriously, when you work a traditional 9 to 5 job in San Francisco, you can feel like an anomaly, and, instead of feeling lucky to have a "real" job, you can feel like you went wrong somewhere. (Because everyone else in the city seems to have so much lovely free time to hang around the Mission and drink coffee!) My co-workers think of me as the weird artsy one who does theater after work, and my theater friends think of me as the weird corporate one who spends all day in an office. On a good day, I feel like a superhero with a secret identity. On a bad day, I feel like I have no identity at all.

But tomorrow, I get to live in my superhero playwright identity for the whole day, so, crowded coffee shops or no, I think it'll be a good day.
Posted by Marissa Skudlarek at 10:13 PM No comments:

Links to tide you over as I ignore my blog in favor of revising my play. The staged reading is happening one month from tonight!

Posted by Marissa Skudlarek at 11:29 PM No comments: 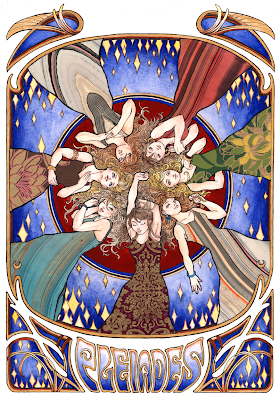 I love, love, love Emily C. Martin's poster art for Pleiades! (Click for a bigger version.) And how amazing is it that the Olympians Festival creates such stunning artwork for what is, in essence, a one-night-only staged reading?

Our Festival art coordinator, Cody Rishell, asked us if we had any guidance for the artist, and I responded with an email about the early 1970s, psychedelic rock posters from that era, Alphonse Mucha, Art Nouveau, maxi dresses, and long-haired girls. (My decision to set Pleiades in 1971 was inspired by a photograph of my mother's six beautiful female cousins wearing long dresses in the early '70s.) I worried that I was demanding too much... but you can see that Emily Martin was able to capture all of that and more! I especially like the swirling mandala-like design.

The first show of the Olympians Festival is in exactly one month and Pleiades is taking place on October 22. Come to my show and have a chance to win a copy of this poster in a raffle!
Posted by Marissa Skudlarek at 11:09 PM 1 comment:

The final reel at the Red Vic Movie House

Vivre sa vie
Sita Sings the Blues
Let the Right One In
Inglourious Basterds
The City of Lost Children
The Fall
Small Change
Tiny Furniture
Vertigo
Harold and Maude
It looks paltry when I just write down the titles, but I believe that that's the complete list of all the movies I saw at the Red Vic Movie House, from the time I moved to the Inner Sunset in January 2009 until the cinema (sadly) closed at the end of July. Consider this a belated obituary.

I feel like there were dozens more movies that I could have or should have seen there (and then maybe, my magical thinking goes, the cinema wouldn't have closed), but this list represents some amazing movies and some indelible memories. I remember seeing Vivre sa vie on a lonely winter Saturday when I was still quite new to San Francisco and finding my way. The heroine is an elusive, mysterious character, and not a role model -- except that I could relate to how she finds solace or catharsis by sitting in a cinema and watching movies. After all, that was what I was doing myself.

Looking at the list I am struck by how many of the movies I saw at the Red Vic have to do with cinephilia or at least have scenes set in movie theaters. Vivre sa vie: the unforgettable scene of Anna Karina watching The Passion of Joan of Arc. Inglourious Basterds: a cinephile's fever dream, with an elaborate climax taking place inside of a movie theater. The Fall: another cinephilic fever dream, a movie that became a cult classic at the Red Vic, its breathtaking images demanding to be seen on the big screen. Small Change: the movie theater provides the backdrop for many of the children's everyday adventures. Inglourious Basterds and The Fall also have strong messages about the power of cinema for good or for ill, how stories capture our imagination and can hurt us or heal us. As does the backstory of Sita Sings the Blues, an animated film made by a woman struggling to get over a bad breakup, transforming her pain into cinematic art.

Holidays were another running theme of my Red Vic moviegoing experience. Let the Right One In as a just-before-Halloween scary treat. The Fall on New Year's Day 2010, the cinema filled with lonely souls. My birthday this year, celebrated with classic cocktails at the Alembic followed by a screening of Vertigo at the Red Vic -- my "HitchCocktail Party." The next day, the Bay Guardian interviewed one of the Red Vic's owners about the cinema's upcoming closure. She said "It's been a long, slow, steady decline. Then again, I worked last night and it was pretty busy for Vertigo." Can I and my party take credit for that?

I wasn't too impressed by The City of Lost Children (amazing set design and visual sense, but I found the story lacking), and Small Change is fairly minor Truffaut, but other than that, I will gladly recommend all of the above movies. And just look at the range of movies that the Red Vic showed! While many of its screenings were of recent-ish indie-ish films, it always made time for the classics. How could I not love a movie theater where I first experienced both a French New Wave classic and a film (Tiny Furniture) made by a young woman who graduated from college the same year I did?

I was there on the final weekend to see Harold and Maude, the cultiest of the Red Vic's cult classics, and I miss the Red Vic Movie House already. So, with Anna Karina, let's shed a tear for what we witnessed on the silver screen: 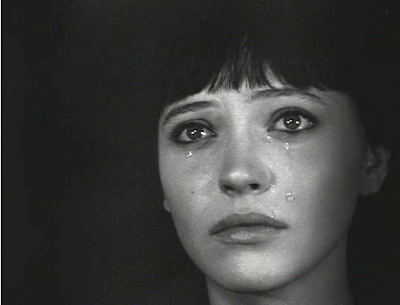 and with Harold and Maude, watch the sun go down on this piece of San Francisco history. 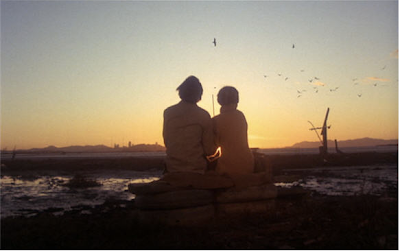 Posted by Marissa Skudlarek at 10:49 PM No comments: