Last November, I got an urgent email from my friend Meg O'Connor. She was producing a music video for a local singer-songwriter, and one of the actors had just dropped out. Would I be interested in waking up early on Saturday, going out to Thornton Beach, and spending the day as an extra in a "mad tea party" scene? I seemed like the kind of person who'd be up for that sort of thing — not to mention the kind of person who could put together an appropriate "mad tea party" costume on short notice.

I was intrigued by Meg's offer and, as it turned out, I had recently dressed up as a suffragette for Halloween, so I had just bought a long Victorian-ish skirt that would work well as the basis for my costume. Meg and her boyfriend picked me up at 7:30 AM on Saturday and I spent a sunny, windy day at the beach, chatting with my fellow extras, pretending to drink tea and eat treats, and trying not to freeze to death.

Despite the cold, the shoot was a lot of fun. So, a month later, when Meg put out a call for dozens more extras for a nightclub scene, I decided to go to that shoot, too. It was a work night; the Olympians Festival was in full swing; I was very busy, and very tired... but something compelled me to participate anyway. "Maybe you'll meet somebody interesting," I told myself. "The reason you live in San Francisco is to take advantage of weird-but-cool opportunities like this."

And as I stood around in the nightclub waiting for filming to begin, I caught sight of one of my fellow extras, a man in a gray three-piece suit and a fedora. And he caught sight of me. I contrived some kind of excuse to chat with him, and soon the conversation was flowing naturally. I learned that he was a high school teacher and a former Classics major — he thought it was so unbelievably awesome that I was involved in a Greek-mythology theater festival. Throughout the night, we continued talking, and discovered more and more points of similarity and connection (we're both from Portland; we went to rival high schools!). Film sets are actually great places for getting to know people — you have a lot of time to stand around and chat with the other extras.
We exchanged numbers and had our first date later that week, seeing Meg O'Connor's Olympians Festival play. Long story short, we continued to see each other throughout the winter, and as of the vernal equinox, we officially became boyfriend and girlfriend.

Needless to say, we are both so glad that we chose to go to the film shoot on that December night, and we love that there's videographic documentation of the night we met! After several months of post-production, the video has finally been completed and released to the Internet. Here it is:

Here's a behind-the-scenes photo of us on that night (flanked by other friends/extras) if you need a better idea of who to look out for. 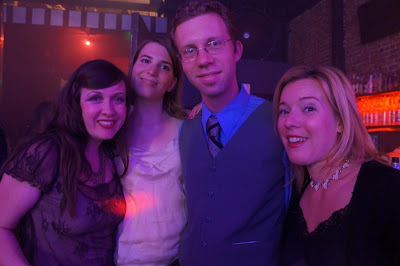 My boyfriend and I are well aware that this is one of the most ridiculous "meet cute" stories ever. At the same time, we like to think it's a good story. And it proves the old truism that the best way to meet people is to keep busy and force yourself to do interesting, unusual things.

And maybe the following isn't a truism, but it should be: sometimes, after years of having a love life that is either bad or boring, a man in a three-piece suit will come along, and you'll be smart enough to take notice, and he'll turn out to be a better fit for you than you ever thought possible.

I'm a lucky girl.
Posted by Marissa Skudlarek at 7:50 AM