"Troublemaker" at Berkeley Rep: Scott Pilgrim vs. the Theater

I was prepared to dislike Troublemaker, or The Freakin' Kick-A Adventures of Bradley Boatright, the Dan LeFranc play making its world premiere at Berkeley Rep. There was that trying-too-hard-to-be-cool title. There was the ad copy, which made the play sound cutesy and juvenile: "Bradley and his bestest friend tangle with rich kid Jake Miller and his middle-school goons. And their nemesis has help from a bunch of zombies and grown-ups!" There was the usher informing me, to my dismay, that the play had three acts and was more than two and a half hours long. There was the annoying, video-game-like preshow music – and if I, a 25-year-old, found this irritating, I could only imagine how much it bothered the mostly retiree-aged audience who surrounded me at Berkeley Rep. 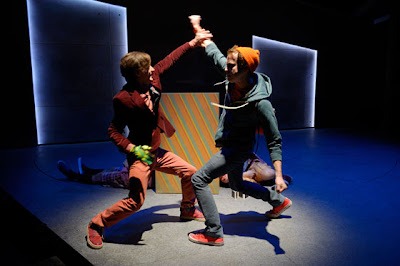 But then the show started, and, surprise surprise... I liked it. The fast pace, the stylized slang, the need to pay close attention to figure out what was going on – and whether it was really happening, or just happening in the protagonist's overactive imagination – swept me up and obliterated my qualms.

The nearest comparison to Troublemaker is probably Scott Pilgrim vs. the World, in that both of them layer a flashy video-game/comic-book aesthetic on top of a story about a boy struggling with everyday problems in mundane surroundings. Well, Bradley would probably call me an "a-hole" for implying that his problems are commonplace. He's 12 years old and, in his own mind, he's a superhero with a tragic origin story, a sidekick, a nemesis, and special powers. But in reality, he's a working-class kid with a taste for mischief and a single mom who might be dating the father of a boy he hates. Well, that's how it feels to be that age: your view of the world doesn't match external reality, and you think that no one else's problems could compare to yours. (At 12, I imagined I was the crown princess of a magical kingdom. Maybe that's what girls do.)

The play is incredibly stylized, but it's far less cutesy than the ad copy implies – one of the things LeFranc explores is whether Bradley might not be just a fun-loving "troublemaker," but a seriously messed-up and troubled kid. The play is also really Genre Savvy. I think where I fell in love with it is the scene where Bradley asks his best friend Mikey to be his "sidekick," and Mikey takes umbrage at this because he's black, which is just what a genre-savvy character and playwright should do.

Act One toggles back and forth between realism and stylization; Act Two goes completely nuts; and Act Three brings it back down to earth to for a more naturalistic, emotional resolution. That second act, though, man... it might be the craziest thing I've seen at a Big Theater in a long time. There's a soup kitchen populated by homeless pirate zombies, the rich kid lounges on a divan as "Goldfinger" plays, our heroes do an unconvincing drag act (leading up to a gay kiss that actually drew gasps from the audience – in liberal Berkeley!), Bradley's smart and mouthy friend Loretta turns into a pint-sized femme fatale... I watched it in disbelief and giddy delight that Berkeley Rep was producing this in such lavish style.

Troublemaker is not a perfect play. There are some parts that I don't think work at all, including the last scene, and some moments whose value is debatable. (I think I was the only person in the theater who laughed at the "poutine" joke, which probably means that it should be cut, even if I enjoyed feeling that this joke was there just for people like me.) But often, imperfect plays are the most entertaining, and they certainly offer more fodder for discussion than a play that is smoothly written but takes no risks. Go see Troublemaker, because it's exciting, and because I want to discuss it with you. Maybe not all of its punches land, but it kicks some serious A.